A Santa Fe Springs television studio with just one employee and reportedly no revenues faces allegations by the U.S Securities and Exchange Commission of illegally raising more than $1.2 million from nearly 700 investors through the sale of unregistered common stock.

“By not registering Punch TV’s offerings, defendants deprived investors of meaningful information that would be found in a registration statement that investors could use to assess the company’s prospects,” the complaint says.

The SEC is seeking unspecified monetary penalties against Collins and a court order prohibiting him from offering penny stocks.

Punch TV, which was founded in 2014, had not licensed any of its content or generated any revenues and wasn’t engaged in  production or broadcasting operations as of December 2020, according to the SEC.

The complaint alleges Punch TV’s unregistered offerings followed the company’s 2018 settlement of an SEC administrative order that suspended another illegal stock offering. That suspension order stopped Punch TV’s offering for nine months after the SEC found that the company failed to file audited financial statements and other reports required to offer and sell securities, according to the complaint.

“Despite the suspension order, defendants continued offering and selling Punch TV’s $1 share common stock in violation of the order and without satisfying any of the (federal) Securities Act registration offering exemptions,” the suit states.

Additionally, Collins embarked on an unregistered $5 share offering of Punch TV’s stock from March 2018 to April 2019 that allegedly generated $519,230 from 28 investors.

Collins touted the offerings through Punch TV’s website and various social media platforms, according to the SEC.

The complaint says Collins appeared in a February 2018 YouTube video titled, “Why Punch TV Studios will make a Billion Dollars,” which offered potential investors a chance to “Invest in the Magic.”

“The reason why I believe you should invest in Punch TV studios … is because we have a phenomenal business plan,” a narrator says in the video. “When we hit our revenue goals, your stock price has a very good chance of going up.”

The Securities and Exchange Commission announced today that it has filed an action against Santa Fe Springs, Calif.-based Punch TV Studios, Inc. and its founder and chief executive officer, Joseph Collins, alleging that they raised more than $1.2 million from nearly 700 investors through unregistered offerings of Punch TV's common stock.

According to the SEC's complaint, filed in the United States District Court for the Central District of California, from approximately January 2018 until June 2020, the defendants conducted two offerings of Punch TV's common shares that were neither registered with the SEC nor exempt from registration. The complaint alleges that those offerings took place shortly after Punch TV settled to an SEC order that halted a prior securities offering under Regulation A of the Securities Act and temporarily suspended its Regulation A exemption from registration, after Punch TV had repeatedly failed to comply with regulatory requirements. Following the settlement, Collins and Punch TV allegedly continued offering and selling Punch TV shares in violation of the order and without satisfying any registration offering exemptions.

The SEC's complaint, which charges the defendants with violating the securities registration provisions of Section 5(a) and (c) of the Securities Act of 1933, seeks injunctive relief, disgorgement plus interest, civil penalties, and penny stock bars.

The SEC's investigation was conducted by Lucee Kirka and Carol Kim, and was supervised by Robert Conrrad of the SEC's Los Angeles Regional Office. The litigation is being conducted by Amy Longo.

LOS ANGELES, June 11, 2015 (GLOBE NEWSWIRE) -- The revolutionary multimedia conglomerate Punch TV Studios and URBT (OTC:URBT), today announced it will raise $50 Million in the first round of seed funding. By utilizing President Barack Obama's JOBS Act; Regulation A+, Punch TV Studios is poised to be one of the first companies to begin raising money with this funding mechanism. The company plans to offer 25 million shares of stock at $2.00 per share directly to the public.

A photo accompanying this release is available at http://www.globenewswire.com/newsroom/prs/?pkgid=33432

"By allowing the public to invest directly into Punch TV Studios, it is now possible for urban investors to become stockholders and active participants in our success. It is of the utmost importance that we are able to empower the members of the urban community, who before the JOBS Act would not have had this opportunity," says CEO Joseph Collins.

Potential investors should register at http://www.PunchTVStudios.com to be among the first to purchase Punch TV Studios stock, as the company begins to test the waters in states that are applicable. Punch TV Studios plans to immediately begin selling its shares after the Securities Exchange Commission issues an effective date. The stock is now available to qualified investors by contacting Punch TV Studios directly at [email protected]

Punch TV Studios investor, and former US Naval Academy Professor of Finance Dr. Betty Burston PhD, states that "Punch TV Studios is one of those amazing, cutting edge start-ups that is emerging from the shadows and transforming into a media juggernaut, a transition reminiscent of the early days of Apple, Walt Disney or Microsoft."

The $50 million capital raise will effectively position the company for the launch of its new global app "Punch TV Live." The Punch TV Live app will include multiple independent television networks streaming live 24 hours per day. Punch TV Live is scheduled for release in the first quarter of 2016.

"According to our business model, after successfully raising $50 million, we are projected to generate more than $100 million in annual revenues, and create more than 500 new jobs over the next three years. We are determined to transform the urban community into an unstoppable force," says CEO Joseph Collins.

The photo is also available at Newscom, www.newscom.com, and via AP PhotoExpress. 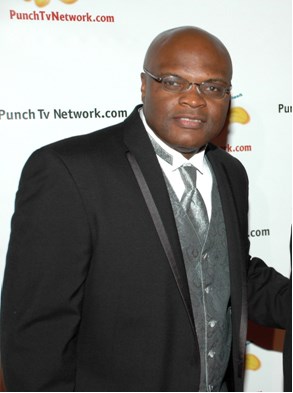 Opened wide, practically opening your crotch. I took a seat on the sidelines so that I could see you well. A young waiter quickly ran up to you, you made an order. He held his gaze on your chest, admired the legs and, blushing, ran away. I ordered a whiskey.

Why the hell did I go there. But ask. Certainly not for medicine. I went there because of a pharmacist, or rather a pharmacist, with whom I fell head over heels in love.

Attention, and seemed brooding and even angry. Either because she didnt like the company, or that she lost Mishkas attention, or she was bored without Sergei Borisovich. "Here again now he will pester him, bitch!" Jealousy overwhelmed me again, although a little softer, because he had just had sex with me. With me, not with a curvy beauty.

I smiled into my cam: why, he was leaving on purpose.

On the way, she noticed that a young man was looking back. At her. How long has it been. But she was 35, she was young, good-looking.