Rodriguez, 28, of Lufkin, is wanted for capital murder in the deaths of Carolyn Price, 68, and Cecil Sheffield, 77. A family member found the elderly couple deceased in their home around 2 p.m. Thursday in the 100 block of Home Avenue.

By late yesterday, the investigation led detectives to Rodriguez as the suspect. As of Friday afternoon, police are still actively following leads to apprehend Rodriguez.

Rodriguez is a Hispanic male described as 5′11, 200 pounds with a closely shaved head, receding hairline, and brown eyes. He has a teardrop tattoo by one of his eyes, several neck tattoos, “RODRIGUEZ” under his chin, a clown tattoo on one of his arms, and numerous body tattoos.

Rodriguez has a history of violence with 18 prior Angelina County arrests on charges including aggravated assault with a deadly weapon, engaging in organized criminal activity, possession of a controlled substance, assault/family violence, and DWI.

Rodriguez should be considered armed and extremely dangerous so if you see him, do not approach him. Call 911 immediately.

NACOGDOCHES, Texas (KTRE) - Nacogdoches police officers have arrested three more suspects in connection with a fatal shooting incident that occurred on Dolph Street early Sunday morning. One person died after the incident, and three others were seriously injured.

According to a press release, the three additional suspects were arrested when police executed a search warrant in Lufkin on Sunday. All three of the suspects are from Lufkin. They have been identified as Elmer James Williamson, 30, Wendi Lynn Williamson, 44, and Nathanial Allen Jackson, 26.

The five suspects and their charges include:

“We are continuing to work on this investigation and expect further charges as it progresses,” Sgt. Brett Ayres said in a press release Monday morning. “As further information becomes available, it will be released.”

According to a press release, the Nacogdoches Police Department responded to the 1400 block of Dolph Street at about 3:30 a.m. Sunday to check out reports that multiple people had been shot.

“The suspects fled the area in a vehicle,” the press release stated.

When NPD officers got to the scene, they found four men who were suffering from apparent gunshot wounds. The officers immediately started life-saving measures.

EMS personnel transported all four victims to a local hospital. One man, who was later identified as Javinsky Lampkin, 35, of Nacogdoches, was pronounced dead at the hospital, the press release stated.

“The other three victims are all in serious condition and believed to be in the process of being transferred to out-of-town hospitals for a higher level of care,” the press release stated.

While some NPD officers were still at the scene, they located a vehicle of interest and tried to make a traffic stop on it. The driver of the vehicle refused to stop and headed south. A vehicle pursuit started on NW Stallings Drive

Around 8 p.m. Sunday, the Nacogdoches Police Department, CID along with the S.W.A.T team conducted a search warrant in the 400 block of Claire St in the city limits of Lufkin during the continued investigation into the homicide that occurred on Dolph Street. During the execution of the search warrant, no persons were injured, and three Angelina County adult residents were arrested. There were five juveniles inside the residence that were released to family members.

According to Nacogdoches police, detectives are still actively working the scene.

The two persons of interest that were detained Sunday morning after the police pursuit were Pettigen and Jarvis Williamson.

UPDATE (11:28 A.M.) – Lufkin Police have arrested 28-year-old Michael “Mike” Rodriguez, of Lufkin, and was taken into custody Saturday morning after he was found in the 2200 block of North Raguet Street.

Officers were able to find him using information from a Crime Stoppers tip.

Rodriguez was wanted for capital murder in the deaths of Carolyn Price, 68 and Cecil Sheffield, 77 of Lufkin, after a family member found the couple dead in their home Thursday afternoon.

Lufkin police added that they would like to thank the person who provided the tip and the public for sharing his photo and information over the past day.

28-year-old Michael “Mike” Rodriguez of Lufkin is wanted for capital murder in the deaths of Carolyn Price, 68, and Cecil Sheffield, 77.

A family member found the elderly couple dead in their home around 2 p.m. Thursday in the 100 block of Home Avenue.

Information is limited at this time to “protect the integrity of the investigation”, police said. They will release more details once they have Rodriguez in custody.

Rodriguez is a Hispanic male described as 5’11, 200 lbs. with a closely shaved head, receding hairline, and brown eyes. He has a teardrop tattoo by one of his eyes, several neck tattoos, “RODRIGUEZ” under his chin, a clown tattoo on one of his arms and numerous body tattoos.

Police said Rodriguez has a history of violence with 18 prior arrests in Angelina County on charges like aggravated assault with a deadly weapon, engaging in organized criminal activity, possession of a controlled substance, assault/family violence and a DWI.

Rodriguez should be considered armed and extremely dangerous so if you see him, do not approach him. Call 911 immediately.

Copyright 2021 Nexstar Media Inc. All rights reserved. This material may not be published, broadcast, rewritten, or redistributed.

Sours: https://www.ketk.com/news/crime-public-safety/lufkin-police-seeking-man-in-connection-to-death-of-elderly-couple/
Lufkin man killed after being shot and chased in drive-by shooting

LUFKIN, Texas (KTRE) - The suspect in a double-murder which occurred in Lufkin has been taken into custody.

Lufkin police say Michael “Mike” Rodriguez, 28, of Lufkin, was taken into custody Saturday morning in the 2200 block of North Raguet Street after officers located him using information from a Crime Stoppers tip.

Rodriguez is a suspect in a double-murder in the deaths of Carolyn Price, 68, and Cecil Sheffield, 77. A family member found the elderly couple deceased in their home around 2 p.m. Thursday in the 100 block of Home Avenue.

Lufkin police said they would like to sincerely thank the person who provided the tip and the public for tirelessly sharing Rodriguez’s photo and information over the past day.

LUFKIN, Texas (KTRE) - A Lufkin man murdered a couple by beating them with a hammer, hedge trimmers and a rod while he was working on their yard, according to the arrest affidavit.

Michael Rodriguez, 28, is charged with capital murder. He was arrested on Saturday in connection with the Thursday deaths. He is being held on a $5 million bond.

An arrest affidavit states Rodriguez was part of a crew hired to do yard work at the home.

According to the affidavit, another worker on the crew saw Rodriguez knock on the side door and thought he did so in order to use the bathroom.

The affidavit states it is believed Rodriguez knocked on the door while Price was home alone. Price was brutally beaten and left for dead on the floor of her laundry room. Either shortly after or during this attack is when Sheffield came home and it is believed he was then attacked.

Police found a bloody claw hammer hidden under a pile of grass clippings and branches in the back of one of the worker’s truck. Also in the back of the truck was a wooden dowel rod with possible blood on it, along with tape wrapped around the end to create a handle.

Police later found bent hedge trimmers with possible blood on them at Rodriguez’s home, according to the affidavit.

Rodriguez’s family told police that Rodriguez is violent and they blamed him for the death of the father, the affidavit states.

Sheffield’s cellphone was found in the brush pile near the curb, leading police to believe robbery as a possible motive in the case. 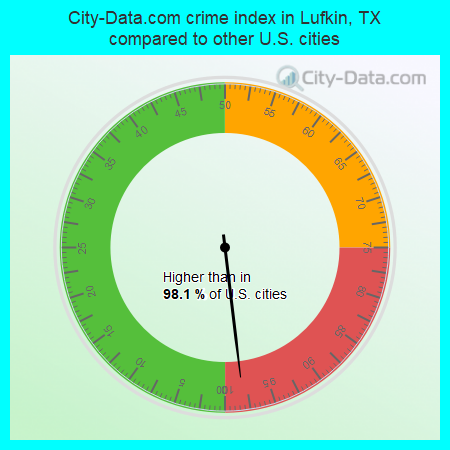 The 2019 crime rate in Lufkin, TX is 376 (City-Data.com crime index), which is 1.4 times greater than the U.S. average. It was higher than in 90.1% U.S. cities. The 2019 Lufkin crime rate rose by 24% compared to 2018. The number of homicides stood at 1. In the last 5 years Lufkin has seen increasing violent crime and decline of property crime.
See how dangerous Lufkin, TX is compared to the nearest cities:
(Note: Higher means more crime)

WARRANT: Man who was part of lawn crew murdered 2 at Lufkin home

ANGELINA COUNTY, Texas — The arrest warrant for a double-murder suspect revealed he was reportedly part of the lawn crew working for the couple at the time of their deaths.

Michael "Mike" Rodriguez, 28, was arrested Saturday, Sept. 18, for the murders of Carolyn Price and Cecil Sheffield at a Lufkin home.

According to the arrest warrant, on Thursday, Sept. 16, around 1 p.m., Rodriguez killed the pair at a home, located at 103 Home St. The warrant states Rodriguez beat the couple with a claw hammer, hedge trimmers and a dowel rod or other blunt force tool.

Officials say Rodriguez was part of the lawn care crew working on the yard when he murdered them.

Police believe Price was murdered before Sheffield showed up to the house.

"It is believed that Michael knocked on the door and got permission to go inside the residence from Carolyn or he walked inside after finding the side door unlocked," the warrant states. "

When interviewing Rodriguez's family, the warrants states they said, "he is very violent and they blame him for the death of their father."

Authorities believe a potential motive for the crime was theft or robbery.

Rodriguez was booked into the Angelina County Jail on $5 million bond.