Gidget is an American sitcom by Screen Gems about a surfing, boy-crazy teenager called "Gidget" and her widowed father Russ Lawrence, a UCLA professor. Sally Field stars as Gidget with Don Porter as father Russell Lawrence. The series was first broadcast on ABC from September 15, 1965 to April 21, 1966. Reruns were aired until September 1, 1966.[1]

Gidget was among the first regularly scheduled color programs on ABC. With a Wednesday night time slot that put it in direct competition with The Beverly Hillbillies and The Virginian, it did poorly in the Nielsen ratings and was canceled at the end of its first season.

The television series was based upon concepts and characters created by Frederick Kohner in his 1957 novel Gidget, the Little Girl with Big Ideas,[2] which Kohner based upon the adventures of his teenage daughter Kathy. The novel was adapted into a 1959 movie starring Sandra Dee, James Darren and Cliff Robertson. The 1965 weekly half-hour television series is seen by some as a sequel to the 1959 film, despite numerous discontinuities in plot, time frame and other details. It can also be seen as an independent incarnation, related to but distinct from either the novels or the films. Kohner served as a script consultant on the show.

The series reintroduced Gidget's friend Larue and married sister Anne Cooper, both of whom appear in Kohner's original novel but are absent from the motion picture series. Gidget's brother-in-law, who appears in the novels as the intelligent but condescending child psychiatrist Larry Cooper, is reinvented in the television series as John Cooper, an obtuse but lovable psychology student.

Gidget centers on the father-daughter relationship between Frances "Gidget" Lawrence and her widowed father Russell Lawrence. Episodes follow Gidget's adventures in school, at home, and at nearby beaches. Russell Lawrence guides his fifteen-year-old daughter, while married sister Anne and husband John offer often unsolicited child-rearing tips. Gidget's friend Larue sometimes takes part in her escapades. More often than not, Gidget receives moral instruction from her father and gains wisdom from her experiences.

Each episode is narrated by Gidget; on occasion, she breaks the "fourth wall" and directly addresses her audience, usually reflecting on what she has learned from the evening's story, sometimes ending with "Toodles!" (an expression Field improvised during production).[3] It was explained in the pilot that her boyfriend called her Gidget because of her demure, petite build and short stature: girl midget, gidget ! 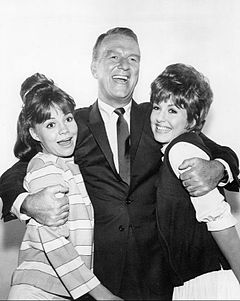 While Jeff was Gidget's true love (she regularly wore his high school ring around her neck), she regularly dated — or more accurately, pursued — other boys while he was away at college.

Gidget was filmed at the Columbia/Warner Bros. Ranch in Burbank, California, with the exterior and kitchen set borrowed from the Hazel series, which was filming its final season at the time. The house situated next door to the Lawrence residence is the principal residence on the Bewitched series, which was in production simultaneously.

The show launched the career of 18-year-old Sally Field, who defeated 75 other teenage girls for the title role.[3] Field exaggerated her surfing experience to the show's casting directors during her audition (she had none); she later took lessons from Phil Sauers just to be able to pretend to surf for the cameras. Sauers served as the series' "Surfing Technical Consultant" and provided the surfboards used during filming of the series.

Don Porter had portrayed Gidget's father, Russell Lawrence, two years prior in the film Gidget Goes to Rome and was asked to reprise the role for the series.

The lyrics of the theme song ""(Wait 'Til You See) My Gidget" were written by Howard Greenfield, with music by Jack Keller. The song was performed in the pilot by The Four Freshmen, and in the series by Johnny Tillotson.

In the credits for the pilot episode, John Cooper is listed as "Larry".

On March 21, 2006, Sony Pictures Home Entertainment released Gidget: The Complete Series featuring all 32 episodes of the series, on DVD in Region 1. The release included the original pilot episode and a short interview with Field. This release has been discontinued and is out of print.

On August 27, 2013, it was announced that Mill Creek Entertainment had acquired the rights to various television series from the Sony Pictures library including Gidget.[5] They subsequently re-released the complete series on DVD on May 20, 2014.[6]

Gidget faced stiff competition during its initial run. The show originally aired on Wednesdays at 8:30 p.m., opposite The Beverly Hillbillies (CBS) and The Virginian (NBC), two established shows with strong ratings. The series was moved to Thursdays at 8:00 p.m. starting with Episode 18 ("Like Voodoo") where it performed poorly opposite CBS's Gilligan's Island,[7] despite airing after the Top 5-rated Batman.

ABC canceledGidget in April 1966 — just as the show began to find a large teen audience. Summer reruns launched the show into the Top 10 as viewers looked for programs they had not seen during their original fall/winter broadcasts. ABC had a belated hit on their hands, but refused to renew the show because they would have to admit they were premature in its cancellation.[citation needed] In addition, industry practice at the time rarely allowed for cancelled shows to be resurrected.[7]

Rather than squander their newly found audience which ABC was hurting for at the time, the network scrambled to find a new starring vehicle for Field. The result was The Flying Nun (1967–70), where Field reluctantly portrayed Sister Bertrille for three seasons.[8] Field later commented that she has great affection for her young persona and was proud of her work on Gidget but was embarrassed with The Flying Nun.[3]

May 28-June 3, 1966 issue of TV Guidefeaturing Sally Field; the series had been cancelled by this time, but ratings had significantly improved.

Gidget remained in regular syndication for several years, one of the few single-season programs to attain this status. Two made-for-television films followed after its demise: Gidget Grows Up (1969) and Gidget Gets Married (1972).

The series gained a new wave of popularity starting in 1983 when reruns began airing on a regular basis (along with The Flying Nun). Another television movie, Gidget's Summer Reunion, was produced in 1985 starring Caryn Richman in the title role. The movie was successful enough to warrant a syndicated sequel series, The New Gidget, with Richman reprising her role. None of the original cast members appeared on the new series, though original series producer Harry Ackerman was present.

Episodes of Gidget are available for purchase on iTunes, and streaming for free through The Minisode Network in the U.S. on Hulu and Crackle.

As of August 2018, the series was available on Amazon Prime video.

Milton Bradley Company manufactured a "Gidget Fortune Teller" game which used Field's image on the box, the playing board and several game cards.[9]

Gidget Lawrence, fifteen and a half years old, falls in love with Jeff, a college student, and takes up surfing to be with him. Gidget has a healthy, trusting relationship with her widowed father, Russell Lawrence, an English professor. However, Gidget's married sister, Anne, constantly checks on Gidget. In this, Anne is abetted by her husband, John Cooper, a student psychiatrist. Anne comes upon Gidget's diary and reads of a romantic episode, described with lurid overtones. Anne and John immediately relay their find to Russell. Slightly worried, Russell discusses possible problems that may have arisen for Gidget. When Gidget finally learns what he is referring to, she points out that the incident is entirely imaginary, being dated for the following day.Russell agrees to go along when Gidget writes another postdated entry, stating she is about to end it all. On reading it, Anne and John rush to the beach with Russell in tow. There, Jeff has been playing up to another girl to annoy Gidget. With the help of her friend, Larue, Gidget reaches an understanding with Jeff. Anne and John are embarrassed by the way they have been misled, but it is apparent that despite Russell's warning, they will not stop trying to run Gidget's life. © 1965, renewed 1993 CPT Holdings, Inc. All Rights Reserved.

Sours: https://www.metacritic.com/tv/gidget/season-1/episode-1-dear-diary-et-al
Gidget Gets A Driving Lesson From Her Brother in law - Gidget

Firstly, you two are in love, and I think you have already seen each other in this form. Second, art is not pornography. Nudity in painting, as such, evokes not sexual, but aesthetic interest, visual admiration for the human body. And third, if you agree, I will pay you. Thirty thousand each agree.

The story is based on real events, although it did not happen to me - despite the fact that the story is told. In the first person. I have always treated any trip as a compulsory measure: to be suddenly torn out of the familiar world of home comfort was completely unacceptable for me.