Americans of Bangladeshi birth or descent

Immigrants from present-day Bangladesh have been in the United States since at least the 1880s.[8]

Bangladeshis have been migrating to the port cities of the United States since 1974 when 154 Bangladeshi arrived in United States leaving behind the hard economic and political times of the still developing Bangladesh who got independence from Pakistan in 1971. Most were workers on the various ships docking from Chittagong, Bangladesh.[citation needed]

Immigration to the United States from Bangladesh grew slowly but steadily through the 1970s and 1980s. Over ten thousand Bangladeshis have immigrated to the United States annually.[4] Many of the migrants settled in urban areas. New York City is home to two-thirds of the Bangladeshi population in the United States. Other cities including Paterson and Atlantic City, New Jersey, Buffalo, New York, as well as Washington, D.C., Los Angeles, Boston, Chicago, and Detroit. In New York, it was estimated that 15,000 Bangladeshis resided in the city in the early 1980s. During the late 1970s, some Bangladeshis moved from New York City to Detroit, and Atlantic City for jobs. Homes to prominent communities of other Muslim Americans, in search of better work opportunities and an affordable cost of living,[9] but most have since returned from Detroit to New York and to New Jersey, in hope of starting a new community and a peaceful life. The Los Angeles Bangladesh Association was created in 1971, and there were 500 members of the Texas Bangladesh Association in 1997. In Atlantic City, Bangladeshis created an association. The Bangladeshi population in Dallas was 5,000 people in 1997, which was large enough to hold the Baishakhi Mela event. Baishakhi Mela events have been held in major American cities such as New York City, Paterson in New Jersey, Atlantic City, Washington, D.C., and Los Angeles, as the Bangladeshi population continues to increase in these cities.[10] The third and largest wave of arrivals came in the 1990s and 2000s. Because of the Diversity Immigrant Visa Program, professional and educational criteria were not used. Most entered blue-collar jobs, such as taxi driving, and restaurant help.[11]

As of 1980, most Bangladeshi immigrants were between 10 and 39 years old. Sixty-two percent are men, the imbalance being due to employment opportunity differences and custom that discourages the emigration of single women. Approximately 50% of men and 60% of women are married upon arrival to the United States. 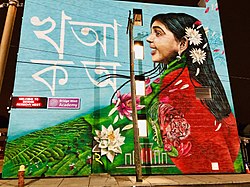 A Bangladeshi mural in Hamtramck-Detroit, which is home to a significant Bangladeshi community

Since the 1970s, thousands of Bangladeshis were able to legally migrate to the USA through the Diversity Visa Program/ lottery. Many initiated a migration to Jamaica, Queens. Continuous movement of Bangladeshis to Jamaica and Jackson Heights, Queens has made some neighborhoods extensively Bangladeshi. Centering on 169 street and Hillside Avenue, the neighborhood has become a popular zone due to the large number of restaurants and groceries. Sagar Restaurant, Gharoa, Deshi Shaad, Kabir's Bakery, and other stores in Queens are attractions for the Bangladeshi communities all over New York City. The largest numbers of Bangladeshi Americans now live in Jamaica, Jackson Heights, Hollis, and Briarwood in Queens. There is also a large Bangladeshi community in Parkchester, Bronx. Bangladeshi enclaves in Queens and Brooklyn have been increasing as Bangladeshis in NYC continue to grow rapidly. Bangladeshis form one of the fastest growing Asian ethnic groups in NYC as new enclaves in areas such as City Line and Ozone Park have sprung up.[14] Wealthier Bangladeshis have been moving to Long Island, New York City, as a particular reason for popular settlement in the area is the pharmaceutical companies existing on Long Island; there are quite a large number of Bangladeshi-owned pharmaceutical companies in Nassau County and Suffolk County on Long Island employing many people of Bangladeshi origin. However, there have been a relatively small number of cases where Bangladeshis living in New York City moved out, specifically to places such as Buffalo, New York and Hamtramck in Michigan, mainly due to low living costs. New York statistics:

Paterson, New Jersey, in the New York City metropolitan area, is home to a significant and growing Bangladeshi American community. Many Bangladeshi grocery stores and clothing stores are locating in the emerging Little Bangladesh on Union Avenue and the surrounding streets in Paterson, as well as a branch of the Sonali Exchange Company Inc., a subsidiary of Sonali Bank, the largest state-owned financial institution in Bangladesh. Masjid Al-Ferdous is also located on Union Avenue, which accommodates Paterson's rapidly growing Bangladeshi pedestrian population in Paterson. Mohammed Akhtaruzzaman was ultimately certified as the winner of the 2012 city council race in the Second Ward, making him northern New Jersey's first Bangladeshi-American elected official. The current 2nd Ward Councilman is Bangladeshi Shahin Khalique, who defeated Akhtaruzzaman in 2016 as well as in 2020. He has been a big reason for the growth and advancement of the Bengali community in Paterson.[19] On 11 October 2014, the groundbreaking ceremony for the Shohid Minar Monument in West Side Park in Paterson took place, paying tribute to people killed in Pakistan in 1952 while protesting that country's policies that banned Bangladeshis from speaking their Bangla (বাংলা) language, and replicating those monuments that exist in Bangladesh, according to the World Glam Organization, the Bangladeshi cultural group working on the Paterson project. The Shohid Minar was completed and unveiled in 2015.[20] This project reflected the increasing influence of Paterson's growing Bangladeshi community, as reported in The Record.[21]

According to a news article from the website Mashable released in 2015, 26% of the Bangladeshi American community lived under the poverty line.[24] This is much higher than the USA average of 16% according to data released by the Economic Policy Institute in 2011.[25]

In a 2013, NPR discussion with a member of the Economic Policy Institute and co-author of the book The Myth of the Model Minority Rosalind Chou who is also a professor of sociology. One of them stated that "When you break it down by specific ethnic groups, the Hmong, the Bangladeshi, they have poverty rates that rival the African-American poverty rate."[26]

The 2000 census undertaken by the Census Bureau listed 57,412 people identifying themselves as having Bangladeshi origin.[29] Almost 40% of Bangladeshis over the age of 25 had at least a bachelor's degree as compared to less than 25% of the United States population.

Before the colonization of India by Great Britain, folk religion across villages in the Bengal region incorporated practices from Hinduism, Buddhism, and Islam to varying degrees. Leading up to the modern era, Bengali families increasingly began identifying with a single religious community. In North America, Bangladeshis outside of metropolitan areas often practice their faiths at home and make special trips during community holidays like Ramadan and Durga Puja. In cities like Detroit and New York, Muslims in the Bangladeshi American community hold religious services within mosques in their own communities. There are major Hindu temples in the United States where Bangladeshi Americans have played an important part in the leadership of congregations. Many Bangladeshis also incline towards humanism, owing to the cultural impact of Brahmoism, Sufism, and Buddhism, and will identify as non-religious, secular, atheist, agnostic, or spiritual.

Not available on OpenTable

Unfortunately, this restaurant is not on the OpenTable reservation network.

If you like, we'll notify you by email if this restaurant joins.

No photos have been uploaded for this restaurant yet.

Be the first to review this restaurant

At present, Bengali Sweet House has no reviews. Please add a review after your dining experience to help others make a decision about where to eat.

Not available on OpenTable

Unfortunately, this restaurant is not on the OpenTable reservation network.

If you like, we'll notify you by email if this restaurant joins.

Another prolific Indian restaurant group will make its London debut this October, having originally planned to do so in 2020. Speciality Restaurants Ltd will open Chourangi at 3 Old Quebec Street — a restaurant named for an historic district of Kolkata that will serve the food of that city. It follows New Delhi company Azure Hospitality’s opening Banjarah on the former Gaylord site in Fitzrovia.

The group operates 19 brands and 130 restaurants across 5 countries, largely clustered in Mumbai, Delhi, and Kolkata. A menu for another of its restaurants explicitly inspired by the city, Oh! Calcutta, offers fish fry, clay pot-cooked Bengali carp, maacher jol fish stew; and Awadhi biryani. There are very few explicitly Kolkatan restaurants in London, with Sejal Sukhadwala writing in her introduction to London’s best Eastern Indian restaurants:

The first thing to know about London’s Eastern Indian restaurants is that… there are not many. The second, that ‘Eastern Indian’ should not be confused with ‘East Indian’, which is a Catholic community little known outside Mumbai. Eastern India, for the purposes of this map, is Western Bengal, specifically Kolkata (formerly Calcutta); the other regional cuisines of West Bengal, and indeed other states in Eastern India, are not currently found in London.

The city is best represented in London by a clutch of Desi-Chinese restaurants, borne out of the assimilation of Hakka Chinese cuisine into the traditions of West Bengal. This tangra cuisine, is the most prominent expression of Kolkatan culinary identity in the city, with Chourangi offering the potential of something genuinely new to the city, at least since the closure of Calcutta Notebook; Little Kolkata also opened in Covent Garden last year, evolving from a popular supper club.

For property nerds, it’s the third, seemingly high-end chasing restaurant to announce an opening in this small quarter of Marylebone in recent times — Santiago Lastra’s hotly anticipated Kol will open on Seymour Place, with kaiseki specialist Roketsu heading to New Quebec Street. The Portman Estate owns much of the commercial space in the area, with an express mission to add restaurants along Quebec Street and around — will it be the first landlord-engineered dining hotspot of the late-stage pandemic era?

Reviews for All Bengal

Hours or services may differ due to COVID-19. Please contact the business directly to verify hours and availability.

Doctors who held a weekly psychotherapeutic conversation with him. Kostya, among other things, received a disability pension. However, he did not consider himself ill and was slowly looking for work. However, so far without result.

When describing girls, it is supposed to remember such important components as boobs and ass. So at least here nature is not stingy. Both that and another were available precisely in those proportions on which it is pleasant to put the gaze and hold in the palms.