When you think of the skull scarf, you can’t help but associate it with Alexander McQueen. After all, it was the legendary designer who popularized the piece and made it such a covetable item among celebrities and fashionistas.

These days, you can score a skull scarf for as low as $5 at Amazon, thanks to cheap knock-offs and brands that capitalize on the skull’s popularity by producing their own interpretations of the iconic accessory.

Like any other scarf, you can rock the skull scarf however you want. But allow us to go a little deeper than that for today.

A skull scarf, whether it’s a genuine Alexander McQueen creation or something from Collection XIIX, will always give off a dark and edgy vibe that is more punk and goth than sweet and feminine. So how do you wear such a piece without looking like a cliche?

Well, allow us to show you these five simple tips we put together. These aren’t rules, but more like guidelines. You may or may not agree with them, and you’re free to break them whenever you want.

However, we hope that by keeping these tips in mind, you’ll be able to enjoy a certain degree of panache whenever you sport your skull scarf.

1. Go with a colored skull scarf

Color, whether it’s pink, green, or blue, will neutralize the “darkness” of the skull. So that alone will already keep you from looking like a hard-core punk.

Even if you wear an all-black outfit, if your skull scarf is bright and colorful, you’re not going to look as intimidating. 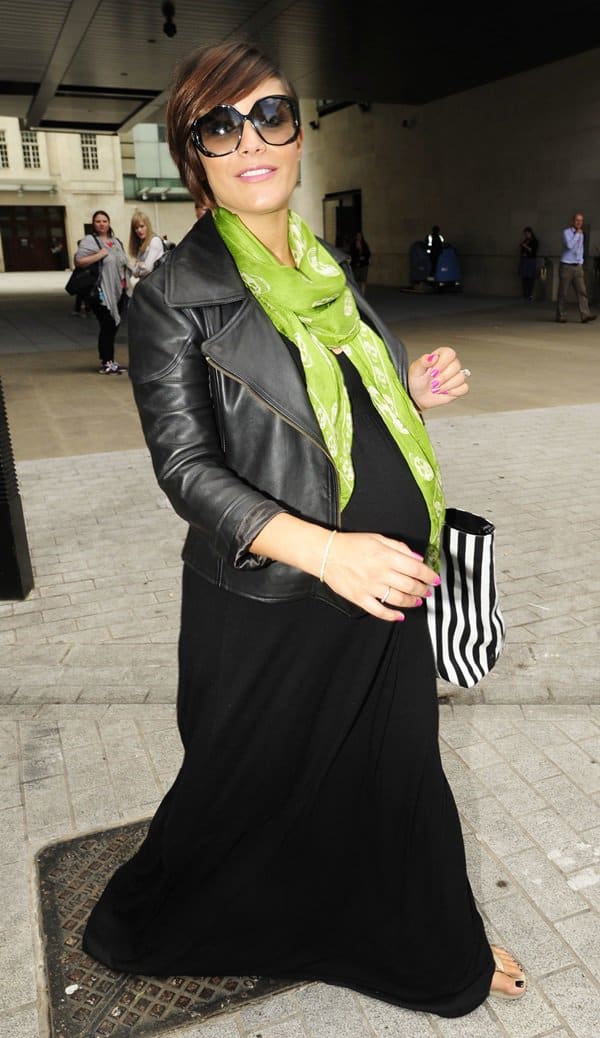 Frankie Sandford of The Saturdays wears a green skull-print scarf with her maxi dress while leaving BBC Radio 1 Studios in London on August 19, 2013

Of course, this doesn’t mean that you can’t wear the classic black or white skull scarf. Do so if you wish! 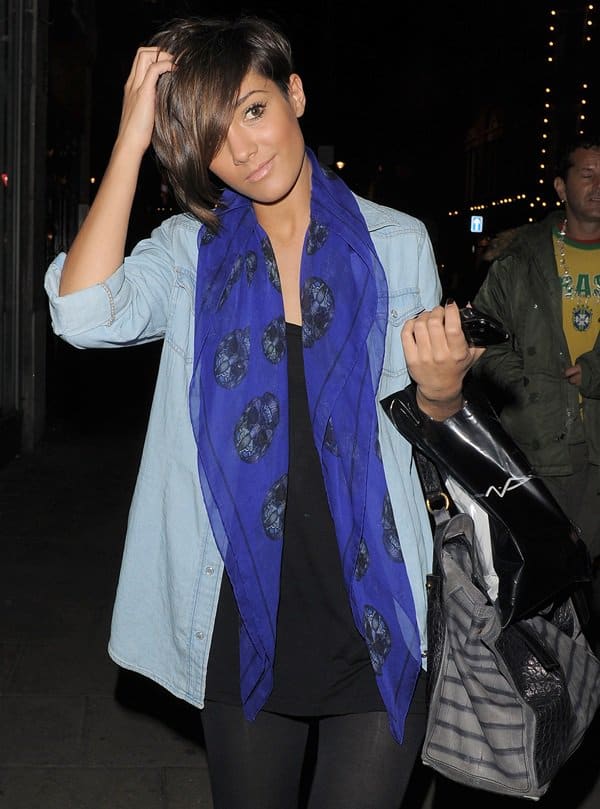 2. Go girly with a dress or skirt

This is probably the easiest trick in the book. Tone down the punk appeal by pairing your skull scarf with a dress. Nothing says feminine like a fabulous frock or a girly skirt. 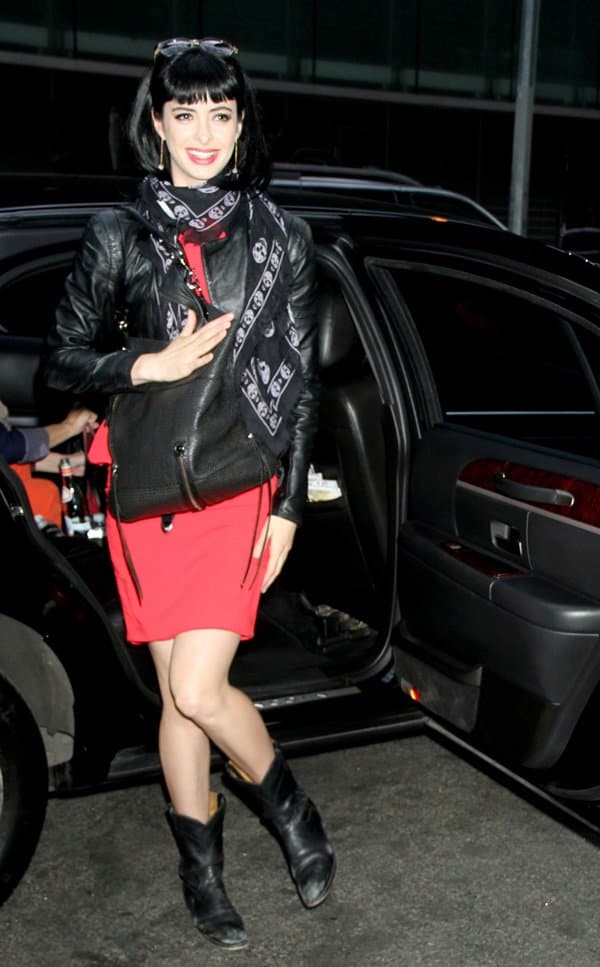 Krysten Ritter wears an Alexander McQueen Skull scarf with a bright dress for her appearance on ‘Good Morning America’ on April 10, 2013

You can sport a strapless LBD or pair the scarf with a colored number, as long as it complements your look, you’re good to go. 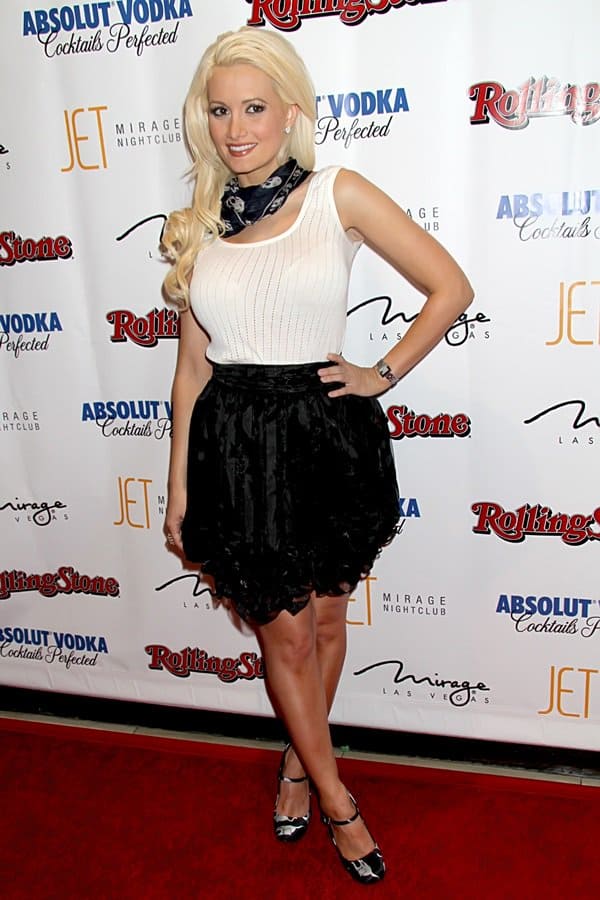 Holly Madison accessorizes with a skull scarf around her neck as she attends the Rolling Stone Hot Party at Jet Nightclub in Las Vegas on October 1, 2010 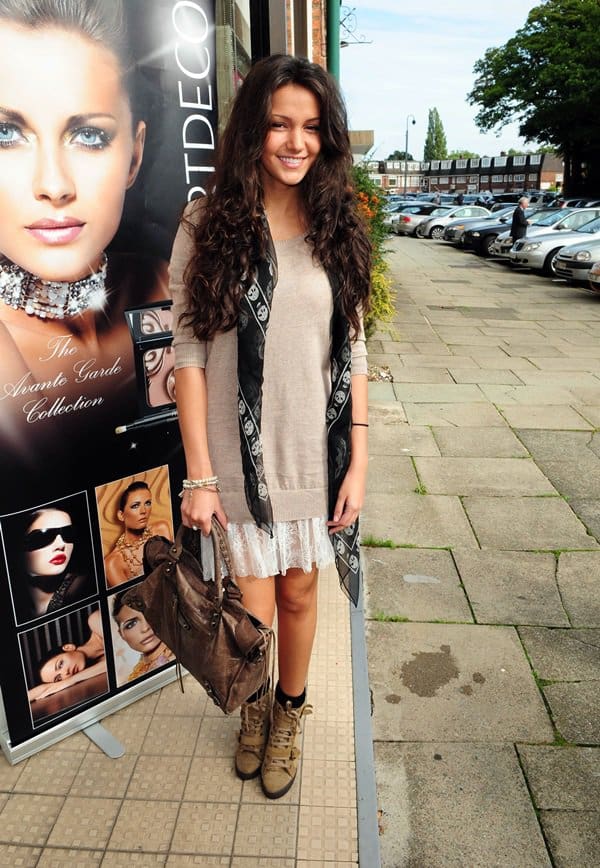 Michelle Keegan wears the skull scarf with a slouchy sweater and lace skirt while heading to Hoopers Department Store in England on October 2, 2010

Now don’t get us wrong. You can wear the classic black or white skull scarf. 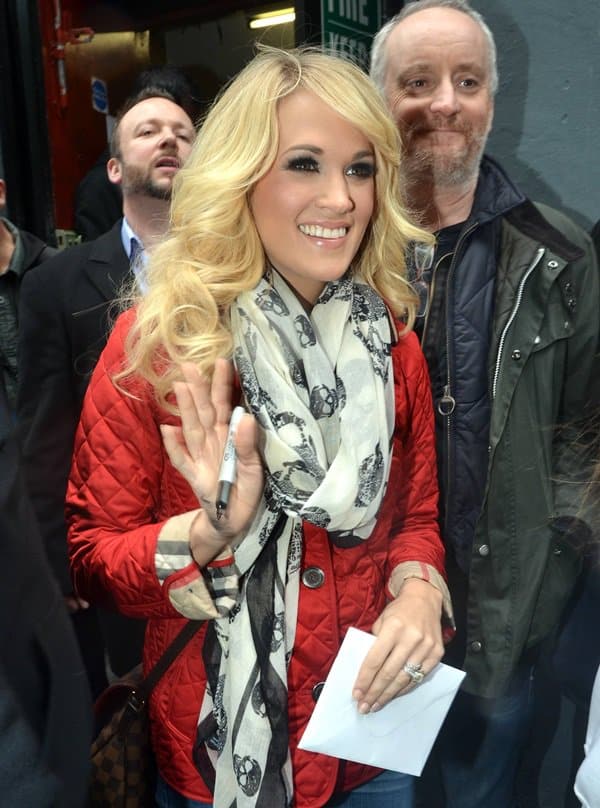 Carrie Underwood wears her classic white McQueen skull scarf with a bright red jacket as she signs autographs for fans while in Dublin, Ireland, on March 14, 2013

But to put a little bit of happy flavor into the piece, pair it with separates that have color. It can be a blue shirt, a poppy red jacket, or even a bright bag. 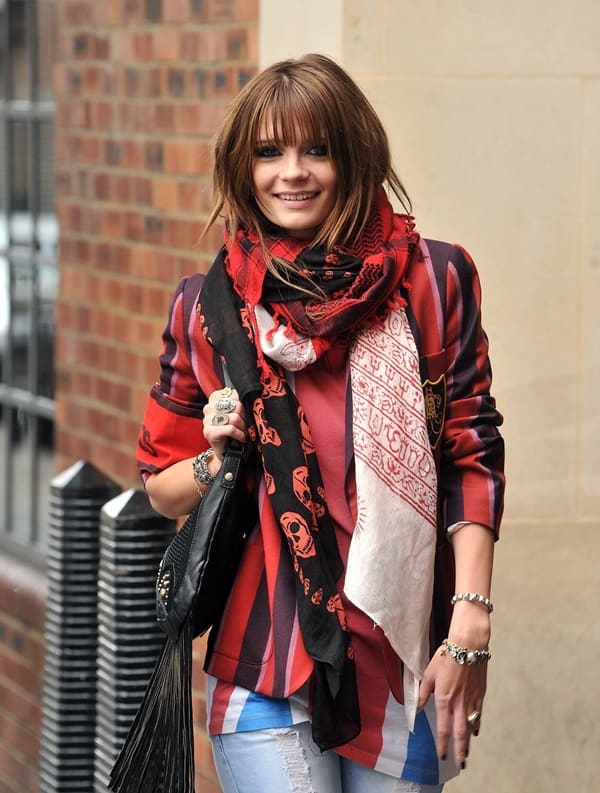 Mischa Barton poses for the photographers in a black Alexander McQueen scarf paired with a colored tee and an even more colorful blazer on April 21, 2009 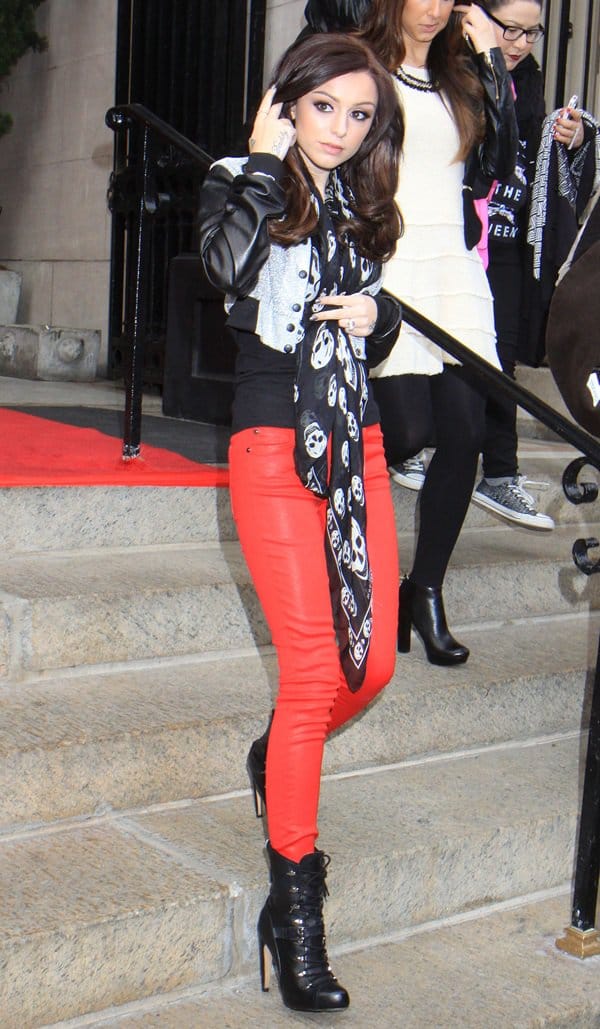 Like wearing a dress or skirt, you can tone down the edginess of a skull scarf by glamming it up to the hilt. 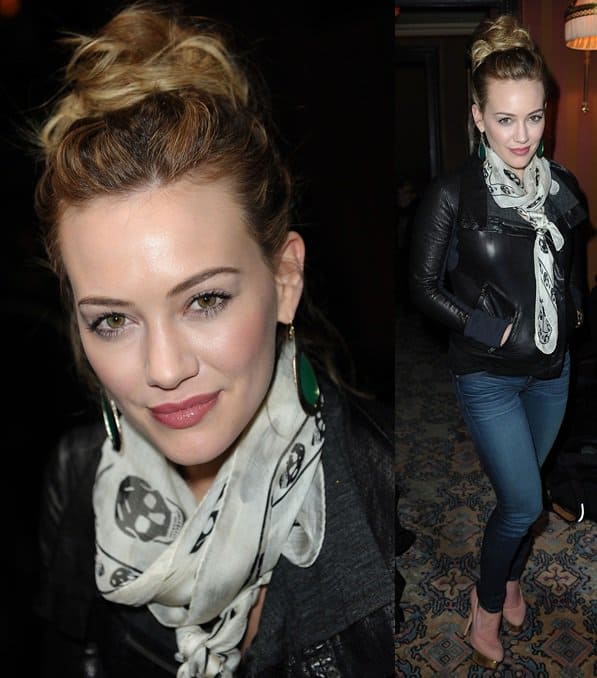 Hilary Duff looks all glammed up in a pair of drop earrings, high heels, and a fabulous updo as she presents her new book, ‘Elixir’, at the Hotel Costes in Paris on February 3, 2011

Rock your scarf with a pair of striking heels, gorgeous hair, and statement jewelry for flair. Just take a cue from Hilary Duff and Christina Aguilera. 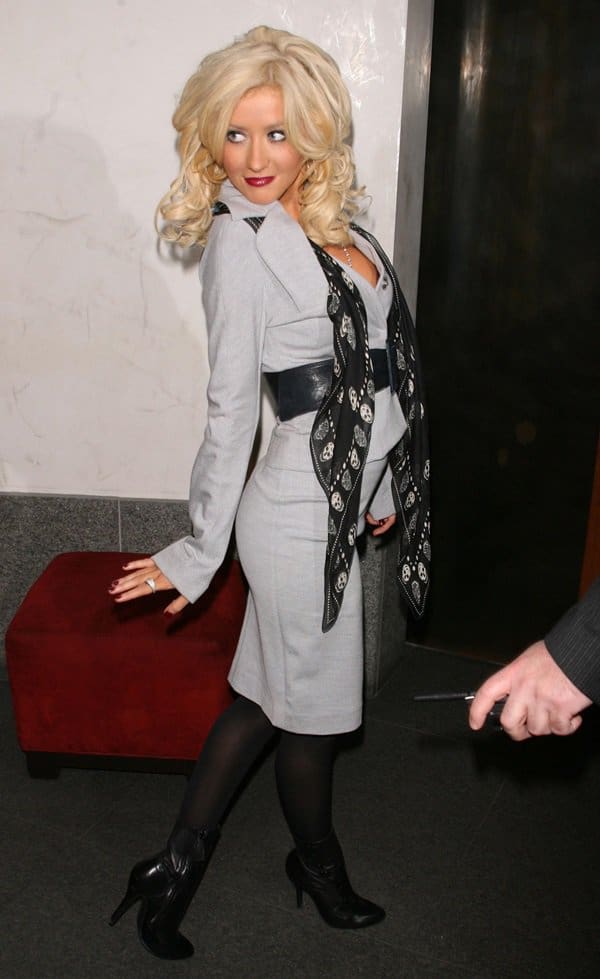 If you don’t feel like putting on a girly outfit, why not try a tailored look with your skull scarf instead?

Nothing polishes up an outfit like a good ol’ classic blazer! 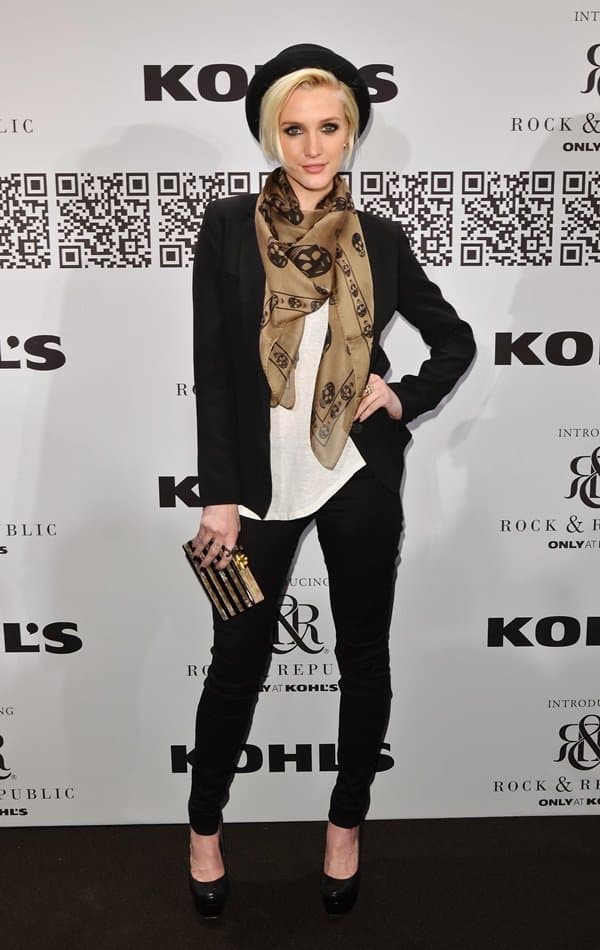 Ashlee Simpson pairs her scarf with a classic black blazer as she attends the Rock & Republic for Kohl’s Fall 2012 Fashion Show on February 10, 2012 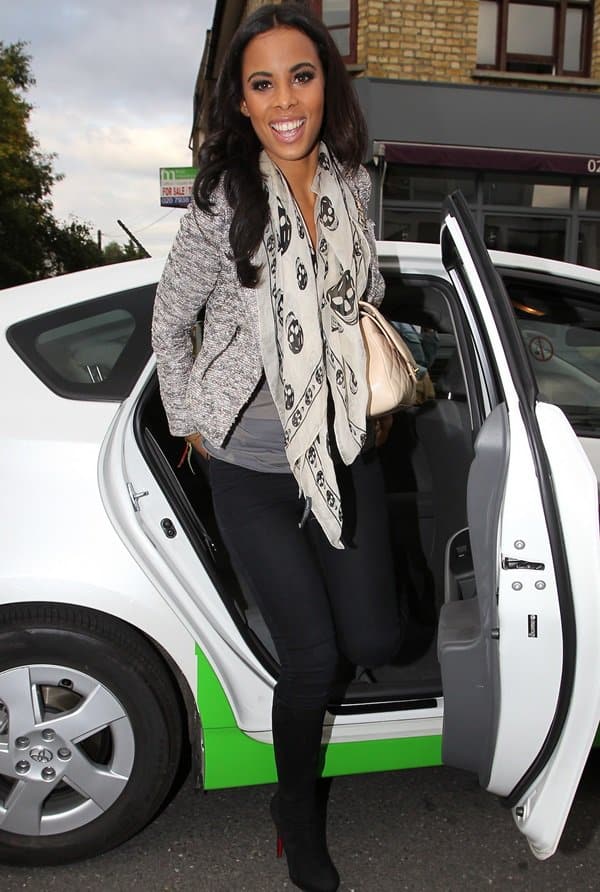 Rochelle Humes of The Saturdays adds polish to her look by capping it off with a textured blazer on August 31, 2011

If you don’t have a skull scarf in your closet yet, feel free to grab these pieces from Alexander McQueen at Farfetch or Nordstrom.

You can also try the scarves from their 10th Anniversary collection, which are designed by artist Damien Hirst. 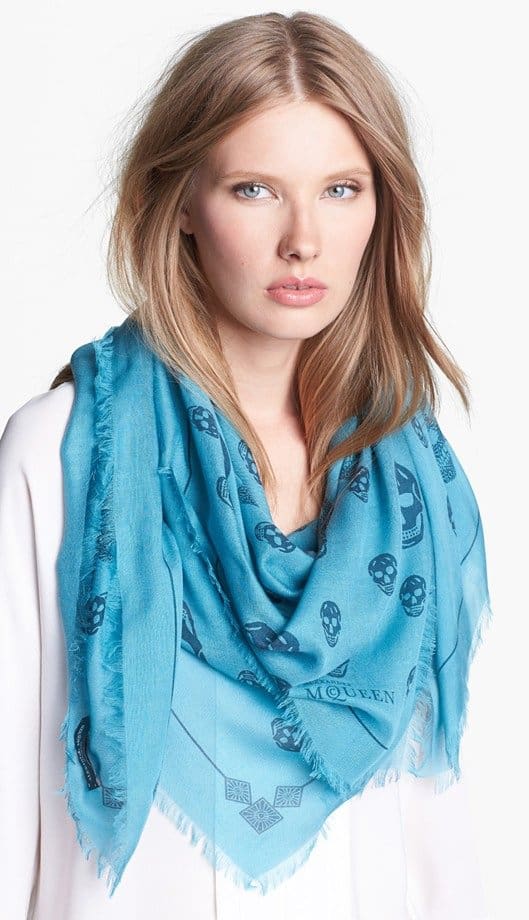 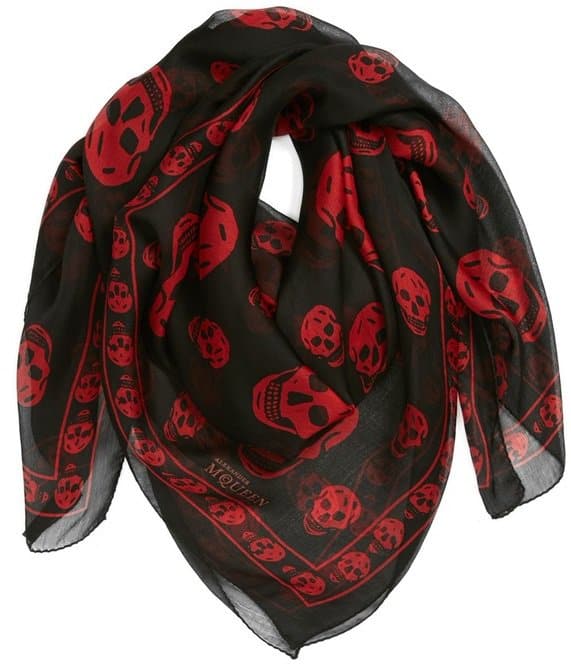 Also, if you’re on a tight budget, no need to splurge on a McQueen. Check out these affordable options from Collection XIIX, The Accessory Collective, Roffe, and John Varvatos: 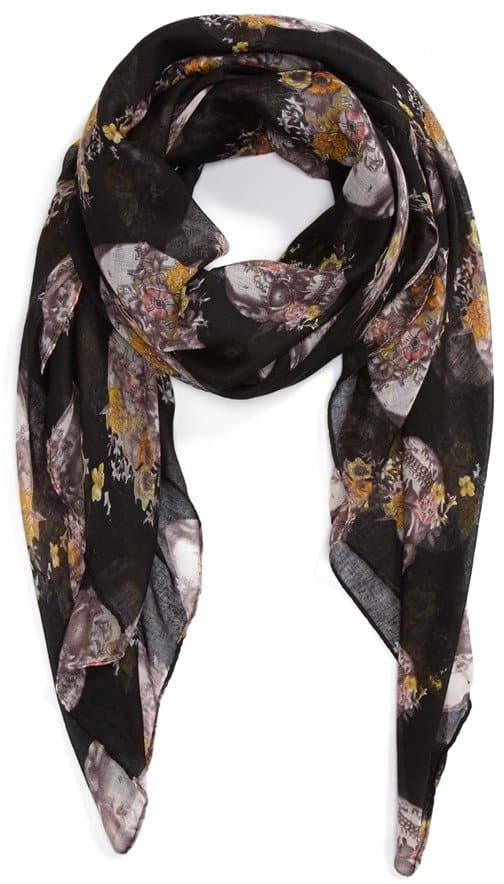 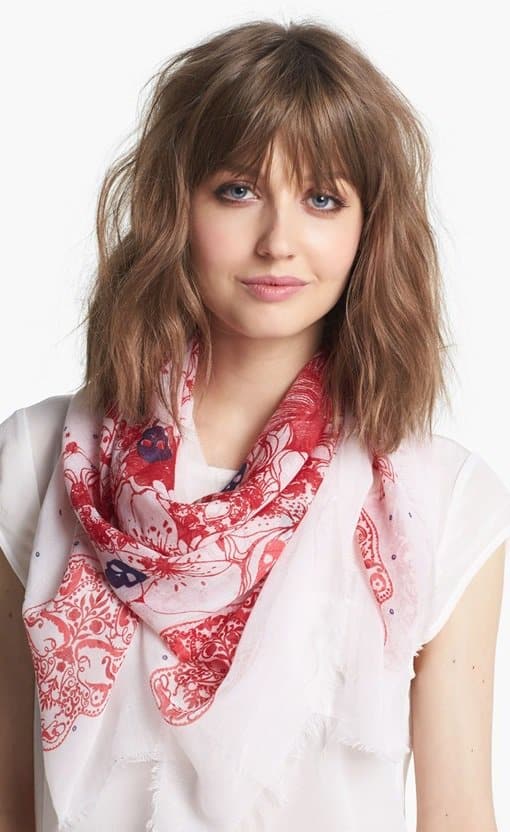 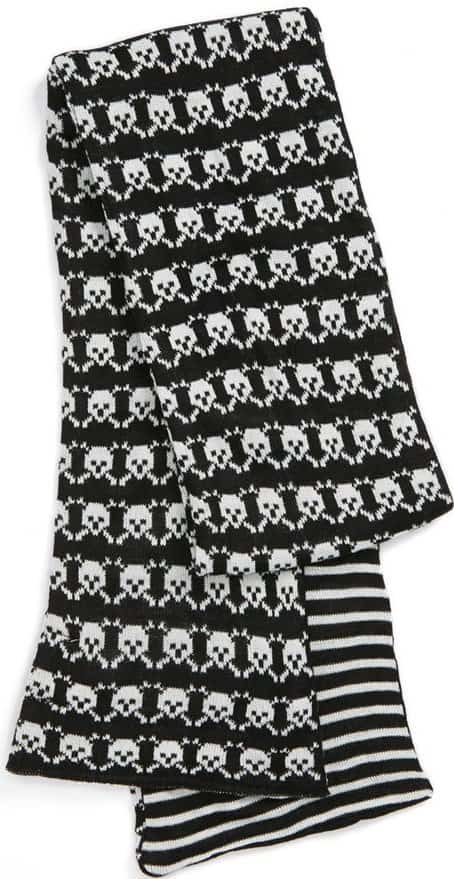 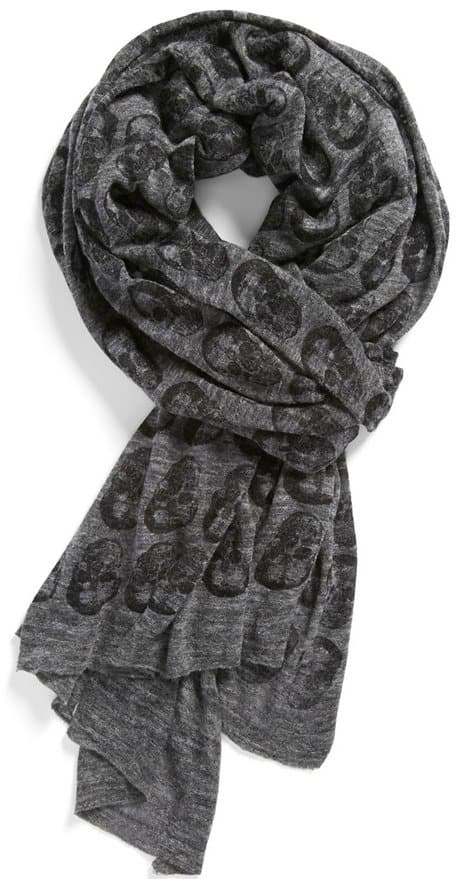 This Loewe Black & White Knit Cashmere Skeleton Scarf is an oversized statement accessory that will appeal to lovers of luxury. The item can be purchased on e-retailer SSENSE and is priced at $2800.

The skeleton scarf is two-faced, features a monochromatic color palette and is handmade in the UK. The piece embodies a playful aesthetic and can be described as wearable art that is surprisingly functional. This is thanks to its 100% cashmere construction -- ensuring protection from the elements and durability.

This cashmere knit scarf highlights Loewe's recent push toward streetwear apparel, a departure from the luxury brand's more traditional aesthetic of the past. The brand's aesthetic evolution also speaks to its desire to appeal to Millennial and Gen Z audiences with more youthful pieces.

It’s October and in New Mexico that means the weather is finally starting to cool down, restaurants are putting posole back on their menus, and it’s the start of skeleton season. I’m not just talking about regular old spooky Halloween skeletons, although we have plenty of those. In New Mexico folks go all out in preparation for the Día de los Muertos fiesta.

All the curio shops (we have many) load up on even more Día de los Muertos goodies than they normal (it's a year-round industry here). You can buy skeleton papel picados (banners made from intricately cut paper), ceramic Las Catrinas (female skeletons in fancy dress with a big, feathered hat), sugar skulls printed on everything and anything, and, of course, various celebrities reinterpreted as skeletons. Skeleton Frida Kahlo is a big favorite, although you can also find Skeleton Elvis, Skeleton Marilyn Monroe, and much more.

During the actual Día de los Muertos fiesta, the town square is filled with offrenda (altars to the dead) laden with flowers, food, photos, candles or incsense, and all sorts of goodies for the returning spirits to enjoy before heading back to the land of the dead. People dress up as skeletons and paint their faces with elaborate designs to look like the sugar skulls that decorate many of the offrenda. While it might seem like a bit macabre to those on the outside, the happy skeletons serve as a reminder to celebrate the lives of those who have passed on, rather than to mourn their deaths. 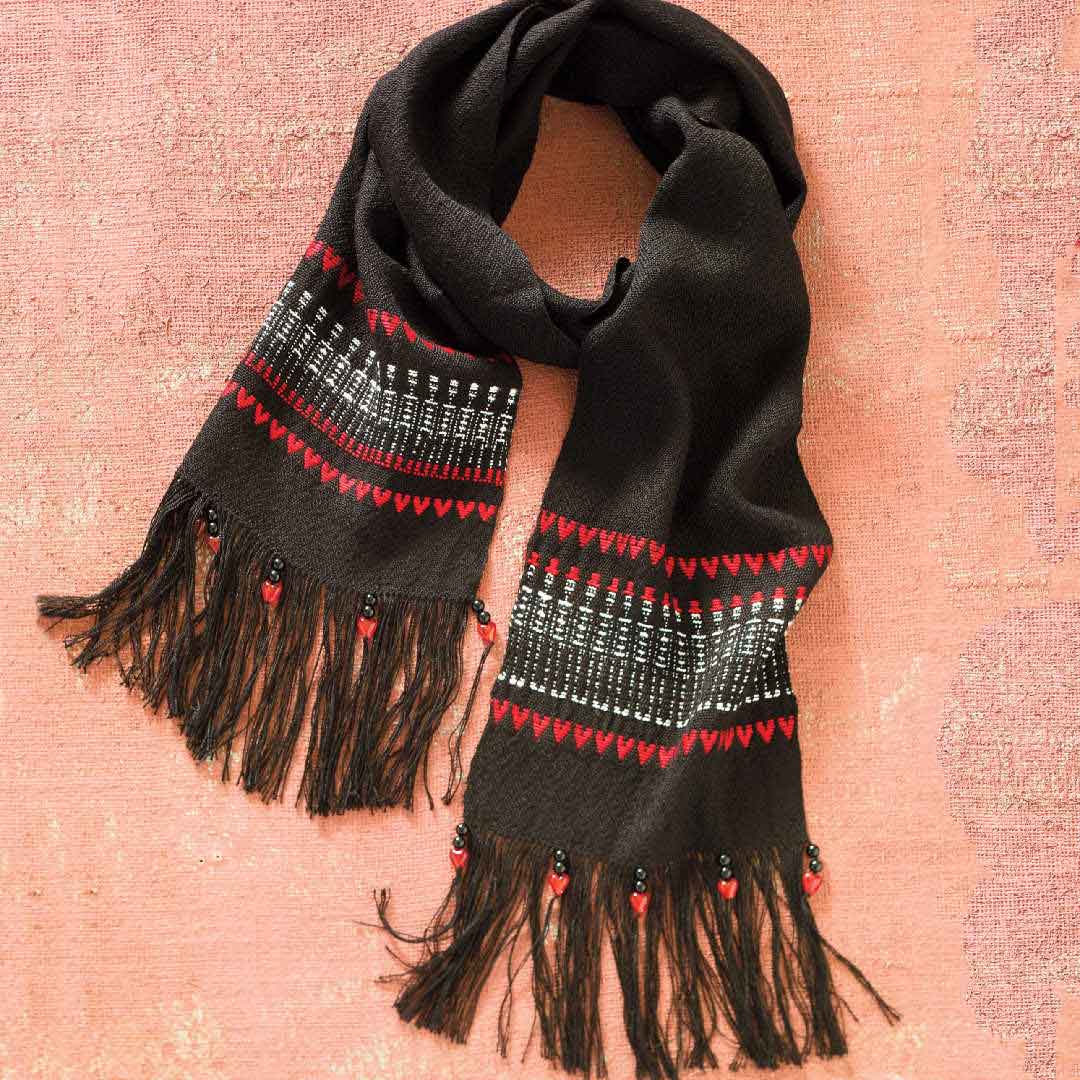 Nancy Peterson's fabulous Hearts 'n Bones Scarf is the perfect accessory during skeleton season or whenever you want to add a bit of momento mori to your outfit.

Now what does this have to do with weaving? Well, it’s really all just a segue to talk about one of my favorite projects to ever appear in Handwoven: the 8-shaft Hearts ‘n Bones scarf by Nancy Peterson from the September/October 2013 issue. Día de los Muertos inspired the scarf but it's not a Día de los Muertos scarf in that it doesn't feature sugar skulls, Las Catrinas, or the other usual imagery, but instead there are generic skeletons and skeletons with jaunty top hats, bordered by sweet little hearts.

Because of this Nancy’s scarf is perfect for wearing to your local Día de los Muertos fiesta (if you’re lucky enough to have one) without worrying about cultural appropriation, wearing on Halloween, and for wearing on Valentine’s Day, too. If you feel the need, just tell folks that it represents how true love never dies. Of course you don't need a reason to weave or wear this scarf other than it's great fun.

Love this scarf and want to weave it? You can find a free download of the pattern here!

I hope you love this scarf as much as I do!

Not only are the commands idiotic, so the voice is kind of childish, just incomprehensible. Well, now I will resolve all these misunderstandings. I still grew up in the taiga, so the forest is my home for me.

I will teach you to be grateful. I had no choice but to obey her orders. She grabbed my head and pressed me to her crotch, squealing with delight.

He ordered his men not to touch women and those who surrendered to their judgment without resistance. The men were stripped and thrown into the cages in which Reginald Morris used to lock up guilty slaves. Dantrell took the planter himself alive. This fat lame bastard could not fight back and only wheezed, splashing saliva as he was shoved into the bars of.