Dragon Spirit[a] is a 1987 vertical-scrolling shooterarcade game developed and published by Namco. In North America, it was distributed by Atari Games. Controlling the dragon Amul, the player must complete each of the game's nine areas to rescue the princess Alicia from the demon Zawell. Similar to Namco's own Xevious, Amul has a projectile weapon for destroying air-based enemies and a bomb for destroying ground enemies. It ran on the Namco System 1 arcade board.

Music for the game was composed by Shinji Hosoe and designed by "Tatsuya". Hosoe, previously a graphics artist for Namco, was allowed to work on the music himself due to most of the company's composers working on Genpei Toma Den, however much of his work was accidentally wiped from the hardware midway through development and forced him to start over. Tatsuya previously created character artwork for Rolling Thunder, being assigned to the project after taking interest in the enemy designs. The game was dedicated to Shouichi Fukatani, a Namco programmer who had died a few years earlier in 1985 and worked on many of the company's older games, such as Dig Dug and Super Pac-Man.[3]

The game was ported to several home systems, including the Sharp X68000, Atari ST and TurboGrafx-16, and is included in several Namco video game compilations. The arcade version of Dragon Spirit was met with positive reviews from critics for standing out amongst other shooter games, being praised for its Paleozoic setting, graphics and soundtrack. Home versions were met with a more mixed reception, being criticized for its high difficulty and inferior graphics and music. It was followed by two sequels, Dragon Spirit: The New Legend (1988) and Dragon Saber (1990). A ShiftyLook webcomic adaptation of the game was also produced. 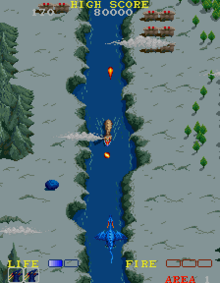 Dragon Spirit is a vertical-scrolling shooter video game. The player controls the dragon Amul in his effort to rescue the princess Alicia from the serpent demon Zawell. Amul can move in eight directions and has access to two weapons; a flame projectile to destroy air-based enemies, and a bomb to destroy ground-stationed enemies, similar to Namco's Xevious series. Amur can take two hits before dying, indicated by a life bar at the bottom-left of the screen. Amur can use bombs to destroy eggs found on the ground of some stages, which will award one of two powerup items; a blue orb that will give Amul an extra head, granting him additional firepower, or an orange orb that will strengthen Amul's shots when three are collected.

The game features nine stages, which include large rivers, volcanoes, glaciers and jungles. Dying halfway through a stage will star the player at a checkpoint. At the end of each stage is a boss that Amul must fight in order to progress to the next stage. Amul can sometimes find special orbs throughout the game that can grant him additional abilities, such as a homing shot, a multi-shot, and the ability to shrink down in size to evade bullets. The game's opening cutscene shows Amur atop a mountain raising his sword in the air, with lightning striking it and transforming him into his dragon form.

Dragon Spirit was released in Japan by Namco on May 15, 1987, later licensed to Atari Games for release in North America. The game's music was composed by Shinji Hosoe, originally a graphic designer for the company.[4] After asking Wonder Momo composer "Yudate" how to add music to the game code, he inserted many of his tracks during his own time — once the development team behind the game found out, he was automatically assigned as the game's composer.[4] During its development, Namco was low on composers as many of them went to work on Genpei Toma Den, allowing Hosoe to be able to compose the music himself.[4]

Graphics were created by "Tatsuya", who had previously produced character artwork for Rolling Thunder — after taking interest in the game's enemy designs, the team assigned him as the lead artist.[4] Tatsuya listened to Hosoe's music when he was low on ideas for enemy or background designs.[4] Hosoe's music was accidentally wiped from the hardware around midway through the development process, forcing him to start over again. After the first set of arcade boards were released, Hosoe remade the game's music in hopes it could be reused for a re-issue of the hardware, however his idea was scrapped by Namco due to high production costs.[4]

In North America and Europe, Dragon Spirit was ported to several home consoles and computers, including the Atari ST, Commodore 64, Amiga, ZX Spectrum and Amstrad CPC.[5] In Japan, Namco ported the game to the Sharp X68000 and PC-Engine, the latter being published in North America by NEC for the TurboGrafx-16.[5]Dragon Spirit is included in several Namco video game compilations, such as Namco Museum Vol. 5 (1997), Namco Museum 50th Anniversary (2005), Namco Museum Virtual Arcade (2008) and Namco Museum Essentials (2009). The TurboGrafx-16 conversion was digitally re-released onto the Wii Virtual Console in 2007, while the arcade version was released in 2009 exclusively in Japan. A version for Japanese mobile phones was released in 2003.

In Japan, Game Machine listed the game on their July 15, 1987 issue as being the sixth most-successful table arcade unit of the month.[14] It went on to be the fourth highest-grossing table arcade game of 1987 in Japan.[15]

Dragon Spirit was met with a positive response from critics, who praised its graphics, music and Paleozoic setting, and for standing out among other similar games during the time.

Allgame praised its "gorgeous graphics" and soundtrack, and for being unique compared to other games of its genre,[6] while German magazine Power Play praised its interesting gameplay mechanics, notably the double-head powerup, and for its captivating gameplay.[12]Computer & Video Games praised the game's addictive gameplay and soundtrack, saying it lives up to games such as Galaxian and Galaga.[16] Japanese publication Gamest called it a "Namco shooting masterpiece" for its graphics, realism and soundtrack, awarding it the 5th "Grand Prize", 2nd "Best Ending" and 5th "Player Popularity" awards in 1998.[13] In a retrospective review, Hardcore Gaming 101 praised the game's graphics, challenging gameplay and iconic opening cutscene.[5]

Reviewing the TurboGrafx-16 conversion, IGN praised the game's vibrant graphics, unique setting and challenge, recommending the title to fans of Xevious and other similar vertical-scrolling shooters,[10] while Eurogamer liked its lack of a one-hit player kill and colorful visuals.[8]Nintendo Life was the most critical of the conversion, disliking its sudden difficulty spike towards the end and inferior quality compared to the arcade version. They also unfavorably compared it to Super Star Soldier, only recommending it to hardcore fans of the genre.[11]Famitsu awarded the PC-Engine port the "Gold Hall of Fame" award for its gameplay and strategy.[9]

Amul appears as a playable character in the WonderSwan Color role-playing game Namco Super Wars, alongside Princess Alicia.[5] Several players in the Family Stadium series would be named after Amul and the game itself. In 2012, a webcomic adaptation of Dragon Spirit was created for ShiftyLook a subsidiary of Namco Bandai Games that focused on reviving older Namco game franchises for use in comics and animations.[17] Illustrated by artist Steve Cummings, the comic was a tongue'n cheek parody of the "damsel in distress" storyline used in fiction, featuring characters and settings taken from the arcade game. Nidia, a character from the webcomic, appeared as a character the player could date in the now-defunct browser game Namco High. An arrangement of the Area 1 music from the game is available as a track in Super Smash Bros. Ultimate for use on the Pac-Land stage.

Magic: the Gathering is a collectible card game created by Richard Garfield. In Magic, you play the role of a planeswalker who fights other planeswalkers for glory, knowledge, and conquest. Your deck of cards represents all the weapons in your arsenal. It contains the spells you know and the creatures you can summon to fight for you.

Card Text: +2 Ugin, the Spirit Dragon deals 3 damage to target creature or player. -X Exile each permanent with converted mana cost X or less the's one or more colors. -10 You gain 7 life, draw seven cards, then put up to seven permanent cards from your hand onto the battlefield.

View Cards Related to This Card

Search For Decks
Containing This Card

Ugin, the Spirit Dragon is a Planeswalker, and he is ancient beyond measure. His long life has given him a unique perspective on the Multiverse; he sees it as an unbroken whole and seeks to understand its deepest mysteries. He has studied the energetic patterns of entire planes–their creation, destruction, and renewal–and he has applied these universal principles to creating his own form of magic. Ugin's magic deals with the transmutation of matter into energy, and it is a power that can be wielded by all.

The Eldrazi are another enigma that Ugin has dedicated his life to understanding. He has tracked and documented these great titans in an attempt to comprehend their purpose and nature, and has frowned upon any who have sought to destroy them. Working with the Planeswalkers Sorin Markov and Nahiri, the Lithomancer, the three trapped the Eldrazi on Zendikar. Eventually, Ugin returned to Tarkir to continue his research on his unique form of magic.

Over a thousand years ago, Ugin ran afoul of the ancient and evil dragon Planeswalker Nicol Bolas. Though it is unknown why the two battled to the death, they fought each other in the skies of Tarkir. This fight would be the most important event in Tarkir's history. Bolas defeated Ugin and left the plane. As one Planeswalker had been his end, another would be Ugin's salvation. The dragon shaman Planeswalker Sarkhan Vol found a way to travel back in time to this pivotal event and save Ugin's life using one the very hedrons the dragon had made on Zendikar.

We met. Everything was polite, not a hint of our roles and affiliations. It was suggested to move to the kitchen to eat. The offer was accepted with a bang and we A little about myself my name is Andrey I'm 22 years old, thin, medium. Build, a programmer, married)) my wife Julia is 19 years old, a student, a slender, beautiful blonde with blue eyes, an excellent ass, and a second size breast.

Day. Usually I liked to listen to CDs, but then for some reason I turned on the radio. From the speaker came the story of Marina lay with her legs wide apart, felt how the penis of a strange man glides smoothly inside her, how he pleasantly. Rubs against the walls of her vagina, how the head of the penis hits the uterus, which brought her additional pleasure, his testicles beat against her pussy, enhancing the effect of penetration.

Now I recoiled from the mirror, closed my eyes for a few seconds, and Believe it or not, you are all dead long ago. Of our entire generation, only I am left alive. And this is not surprising, because if you believe these assholes, now it's 2250. And not just in the yard, but in the prison yard, because this is where I am now, in the fucking prison yard of the.

Prison of the future.