-
Price INCLUDES shipping and boxing. Boxing and shipping will be done by local bike shop in Spokane (North Division Bike Shop).
-
Local pickup = take $100 off.
-
Old link to Redline website: http://redlinebicycles.com/bikes/2014-conquest-pro-disc/ Not sure this works anymore...

Restrictions: Reasonable offers only, No Trades, Will ship within country only

THE STORY
Redline has been at the forefront of the American cyclocross scene for a long time. The first Redline ‘cross bike appeared as a frameset back in 1994 and was one of the first ‘cross bikes to be constructed from TIG-welded 7005 series aluminum. Aside from the aluminum construction, one of the biggest innovations was the slack 72-degree headtube angle. This was a major departure from most European ‘cross bikes of the time and was done to accommodate the rougher, more technical courses. Since then, Redline has continued to push the envelope with innovations like the first TIG-welded 6061 ‘cross fork, scandium tubing, lower bottom bracket height and 11/8 headtube. For 2009, Redline continues to push forward by tweaking and upgrading their top-of-the-line Redline Conquest Team. 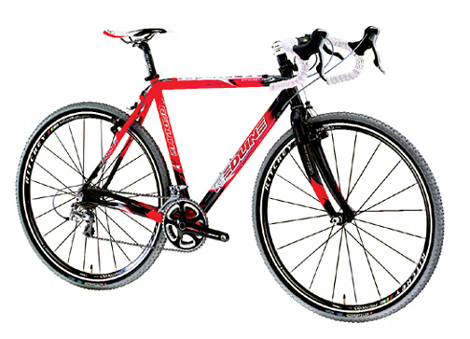 THE FRAME
The Conquest Team is Redline’s top-of-the-line triple-butted scandium frame. The frame’s sole purpose is to go as fast as possible. To this end, each tube has been butted or shaped with the purpose of adding stiffness, reducing weight or enhancing performance. The seatstays feature an S-bend design to increase rear-braking performance and absorb road and trail shock. The top tube is flattened to increase front-end stiffness and make shouldering the bike easier. A major performance feature on the Conquest Team is the asymmetrical chainstays. While the non-drive side has a more conventional tube shape, the drive side has a CNC-machined chainstay at the bottom bracket area. This adds torsional stiffness to the bottom bracket area, while still maintaining good tire clearance. The down tube also increases bottom bracket stiffness with its bi-axial shape. This also increases the stiffness of the front end, and coupled with the 1-1/8-inch externally butted headtube, keeps the Conquest pointed in the intended direction. A major change for 2009 is the addition of Redline’s own full-carbon fork. The Redline fork replaces the Ritchey WCS ‘cross fork from last year’s Conquest Team. While happy with the performance of the Ritchey fork, Redline wanted a fork with less trail and more stiffness to increase steering precision and reduce brake chatter. Redline’s new fork features 44 millimeters of rack compared to 48 millimeters on the Ritchey WCS, while the cross section of the fork has also been greatly increased. Redline did include fender outlets on the frame and fork to appease die-hard commuters.

THE PARTS
The Conquest comes equipped with a Shimano Ultegra drivetrain 105 12 to 27 cog set. Ritchey nicely outfits the cockpit with a white WCS stem, WCS handlebars and WCS alloy seatpost. Ritchey Protocol wheels, Selle San Marco ASP saddle, and 23c Hutchinson Bulldog tires round out the Conquest. An FSA Energy crankset breaks up what would be a complete Shimano Ultegra drivetrain, while a set of carbon fiber TRP cantilever brakes handles the stopping duties. Out of the box, the red and black paint scheme gives the appearance of a race-ready machine. The black Ritchey wheels and white-accented stem, saddle and bar tape add to the race-ready appearance.

THE RIDE
The Redline Conquest is a race bike. All the work that Redline did in building a laterally stiff frame paid off. Every pedal stroke launches the bike forward. Out-of-the-saddle efforts are done without a hint of flex from the bike. Climbing performance was first-rate, mainly due to the stiff frame and low weight. Steering is precise and the addition of the new Redline carbon fork gives the bike a confident feel that is appreciated when diving into corners. The reduced trail on the new fork could definitely be felt, and we were surprised at how much it improved the performance of the bike. The Conquest cornered and descended well and rarely got kicked off its line. The Ritchey Protocol wheels are smooth and reliable, and with the Hutchinson Bulldog tires gave a good solid feel to the bike.

THE VERDICT
Most of the time the RBA staff wants things added to a bike to increase performance. The Redline Conquest might be the only bike that we have tested where the opposite is true. Our 56-centimeter Conquest had a 56.5-centimeter top tube mated to a 110-millimeter stem. A couple of testers said they would switch to a 100-millimeter stem for better handling on twisty courses. Coming from the road we would also switch to slightly narrower handlebars than the 44-centimeter Ritchey’s. Along with a tighter cockpit we would remove the top-mounted brake levers. Several riders felt they got in the way when switching hand positions, and we were never able to get a good lever feel when using them. Finally, while we love the look of the white bar tape and saddle, it just isn’t practical for a ‘cross bike and looked dirty after a few rides. The Redline is an out-of-the-box race bike. Amazing frame, full carbon fork, great parts, and great handling are sure to keep Redline at the forefront of the cyclocross scene.

The bicycle fork's legs can separate from the fork crown and cause the rider to lose control, posing a fall hazard and risk of injury.

The firm has received five reports of cracks near the fork's crown.

These were sold at bicycle specialty stores nationwide between July 2009 through May 2010 for about $1,400 for the bicycle and $400 for the frameset. They were manufactured in Taiwan.

Consumers should immediately stop using the recalled bicycles and framesets and contact their local Redline bicycle dealer to receive a free fork replacement.

Consumer Contact: For additional information, contact Redline Bicyles at (800) 283-2453 between 9 a.m. and 5 p.m. PT Monday through Friday, or visit the firm's Web site at www.redlinebicycles.com.

This bike helped set the bar three years ago, and other bikes have come to eclipse or raise that bar. The Redline Conquest Flight is still at the top with the others that have come to join thanks to its stellar qualities, light weight, smooth ride and sharp handling. Redline was able to mate light weight, sharp handling and a smooth ride all in the same frame. © Clifford Lee/Cyclocross Magazine. I turned on my computer and stared at the blank page of the Word for a long time. There is no muse, You come home, and your husband is already waiting for you. Unusual. Yes, but there should be joy in your life.

I wrote to one pretty woman. I liked her for a long time. And we periodically corresponded on the topic of visiting, etc. In reality, we communicated little, although we have known each other for several years. A lady about my age, married with children.

A travel agency. As a matter of fact, it was there that we met when I was planning to go on vacation with a group of friends. A guy-manager worked with us, but there was confusion over the exchange rate, and to resolve this issue, the senior manager, Victoria, intervened.

I liked her immediately, she looked very sexy in a business suit, which could not hide a rather slender physique and. Excellent legs.