A proposed law is known as a bill, which can be introduced in either chamber of the Kentucky legislature. After a bill is introduced, it will be referred to one or more standing committees. These committees determine whether a bill should move forward, and they also can propose amendments to a bill. If a bill passes through the committee phase, it will return to the chamber in which it was introduced. This chamber will discuss the bill and consider any amendments suggested by a committee or by members of the chamber. Once the bill has been finalized, the original chamber will vote on whether to pass it.

If the bill is passed, it will go through the same process in the other chamber. Sometimes the second chamber will amend the bill and pass a different version of it. A bill will not reach the next stage unless the differences between these versions are resolved. Each chamber must pass identical versions of the bill.

Standing Committees + Interim Committees
Bills which are introduced are assigned to a standing committee, and the assignments are determined by the subject of the bill.  Bills are often pre-filed before the legislature meets and interim committees are responsible for drafting bills which are prefiled before the legislature meets.

The Legislative Research Commission - LRC
Phone: (502) 564-8100
LRC is a full-time service body for the legislature.  The LRC provides committee staffing; bill drafting; oversight of the state budget and educational reform; production of educational materials; maintenance of a reference library and Internet site;, and the preparation and printing of research reports, informational bulletins and a legislative newspaper.

The Kentucky Revised Statutes were enacted in 1942, largely as a result of the Statute Committee of 1936. The goal of the committee was to reduce the amount of clutter that had accumulated in Kentucky's prior statutes and draft an organized body of law from what remained. The most important task was rearranging statutes that were topically related but not located near one another in the statutes as they existed.

1942 also saw the creation of a Statute Revision Commission and office of Reviser of Statutes. In 1954 the jobs of the Commission and Reviser were consolidated and transferred to the Legislative Research Commission.

By law, the Legislative Research Commission is directed to clarify, organize, plan, and draft laws. It is also responsible for publishing the laws online.

Your browser is not supported by this site.

Please update to the latest version, or use a different browser for the best experience. 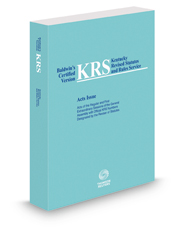 Purchase the current version only, no updates will be sent.

Purchase the current version only, no updates will be sent.

Our Assured Print Pricing program offers predictable monthly pricing and capped year-over-year price increases. Choose between 2, 3, 5, and 10-year agreements. All updates, new editions, and revisions are included in your monthly payment and delivered automatically, as soon as they become available.

My knees were shaking. I was not even asked. She looked at me with intelligent eyes, she knew how to do that.