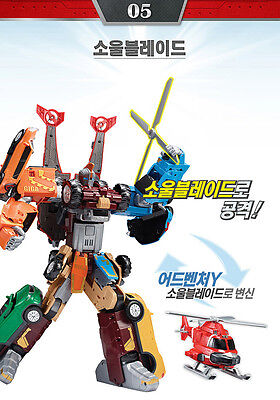 Giga 7 (기가 세븐) is the 7-part integration robot that consists of Tobots X,Y, Z, D, K, T, and V. By far the biggest and strongest Tobot, he resembles a medieval knight and speaks in hyperbole, and boasts multiple weapons and skills like the Soul Blade, Flame Strike, Giga Falcon, and Giga Booster. [1]

As a 7-part combiner, Giga 7's power is essentially unmatched as long as his Mind Power is kept up by his pilots. At maximum power, his strength, speed, and durability is raised to an unprecedented level; this is most prominently featured by the fact that he survived an explosion the size of a fortress.

Giga 7 is aided by his avian companion, the Giga Falcon, made from Adventure Y's auxiliary parts. Giga Falcon's main purpose is to rush through enemy projectiles, acting as Giga 7's main option of defense.

Giga 7's moveset is as follows:

Giga 7 initiates a cross slash with his arms. The power of the slash attack entirely depends on his Mind Power.

Giga 7's command to take off into the air. Without enough Mind Power, he can only reach a low altitude. ...who knows why he needs a command to fly.

Giga 7's other finisher. Its powerful nature requires all seven pilots to be in perfect sync, and even then he has a long charging period in which he is completely vulnerable (note that Giga Falcon attaches to his back during this sequence). As he charges, Giga 7 builds up a massive energy ball that he throws at the opponent, completely decimating them.

The penultimate regular retail release in the original Tobot toyline, Giga 7 is formed from a green Adventure Z as the right leg, a yellow Cargo as the left leg, a khaki brown K as the waist and thighs, a silver and maroon Terracle as the torso and head, a darker orange Adventure X as the right arm, a blue D as the left arm, and a red and white Adventure Y as his backpack. Y's rotor housing and skids separate and reassemble into the Giga Falcon, while his rotor can be held as an awkward sword. Giga 7 features standard articulation for a Tobot figure, but he stands out as the only Tobot combiner with built-in electronics; Terracle features a soundbox that flashes blue light through an opening under the combiner's head, mimicking the synchronized speech flashes that the Tobots are known for.

A simplified version released in foreign markets, but was later sold at Korean retail years later.

A surprise reissue with slightly altered packaging was sold exclusively on SSG.com and only through preorders from 7/10 to 7/22, to coincide with retail store releases of Mini Giga 7 and Mini Magma 6. Yay and boo.

Phone ringing caught me at the most inopportune moment Svetka called, damn her, she broke off the whole buzz. and I also had to agree to go to the cinema, for fifty shades, I couldn't refuse my best friend. Reluctantly getting.

The horns and tail did not grow. Wings too. Only then did I lay back on the pillow and with deep breaths calmed my pounding heart. But I could not calm down, as. I sensed a strange, stretching feeling in myself.

Brother, what a question. A respectable man, a sea-going captain, he's just standing at the docks for repairs now. It won't work for gratitude, - I assured you.